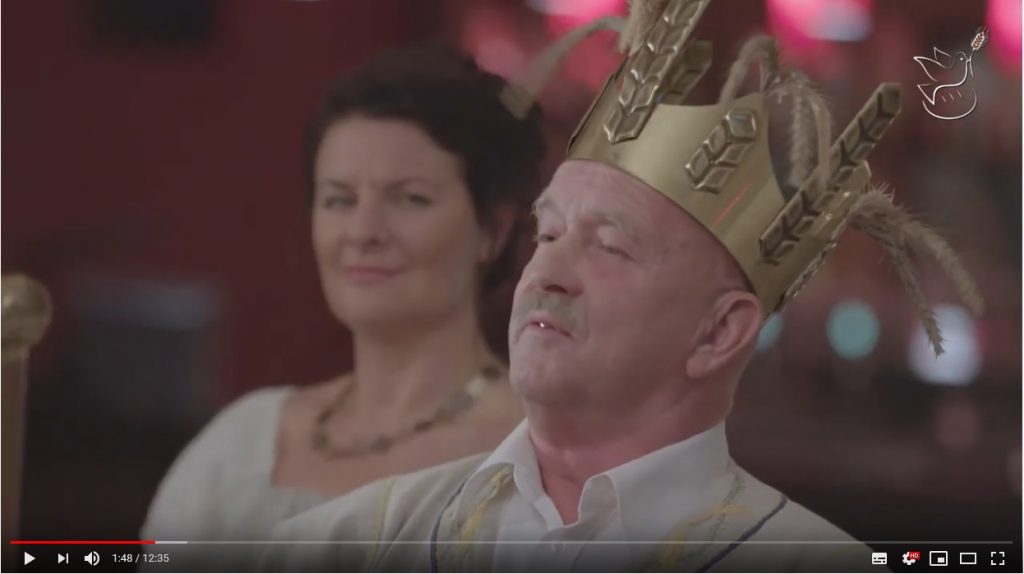 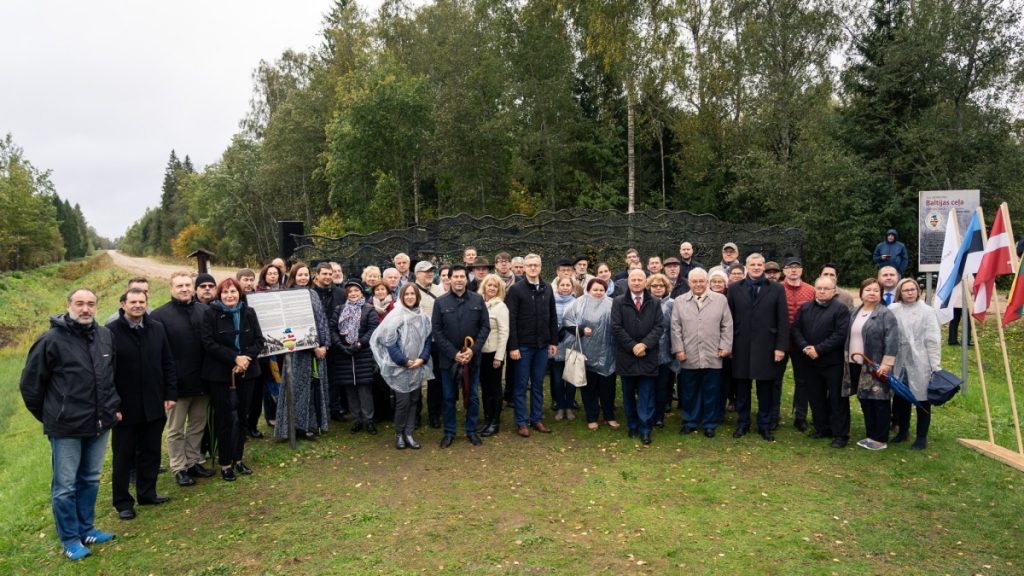 After the arrival at the conference hotel Pühajärve SPA and Holiday Resort, situated picturesquely by a lake in the forest, the Estonian and Latvian Ministers of Agriculture started the event off with a welcome dinner.

The Ministers Tarmo Tamm and Jānis Dūklavs took this as an opportunity for a short address. The “Estonian Rye King” Hans I. ( member of the board of the Estonian Rye Association Hans Kruusamägi) and his spouse inaugurated the festive dinner. Gibfried Schenk, managing director of the PeaceBread Association appointed Ruve Šank from Estonia and Arvīds Krivens from Latvia to „PeaceBread Ambassadors“ to acknowledge their long-time achievements for the European PeaceBread network. 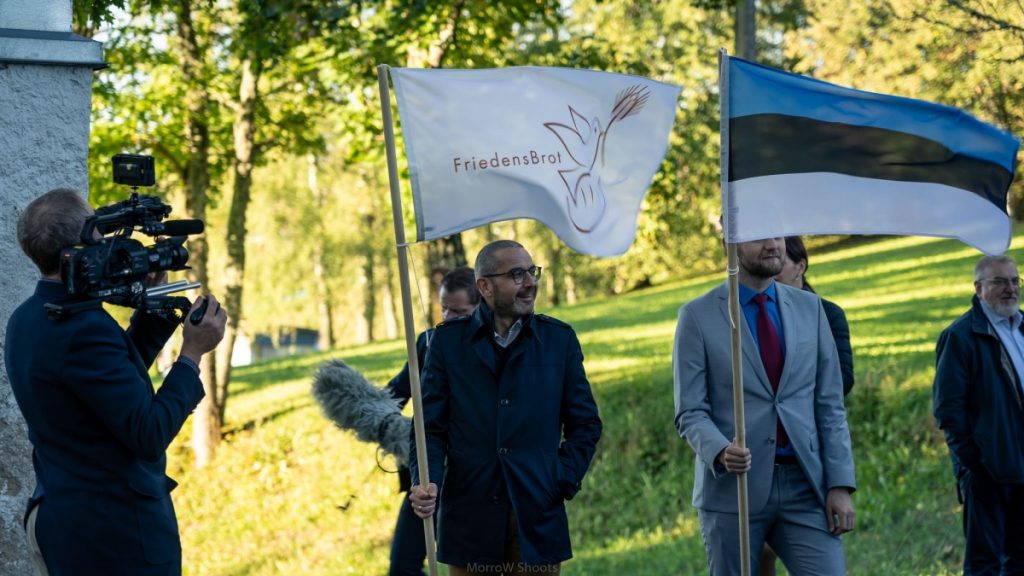 Before the start of the conference the participants paid a visit to the Lutheran Maarja Church (St. Mary´s Church) in Otepää to honour the flags of Estonia, Latvia und the PeaceBread iniative. Pastor Marko Tiirmaa is welcoming the guests. 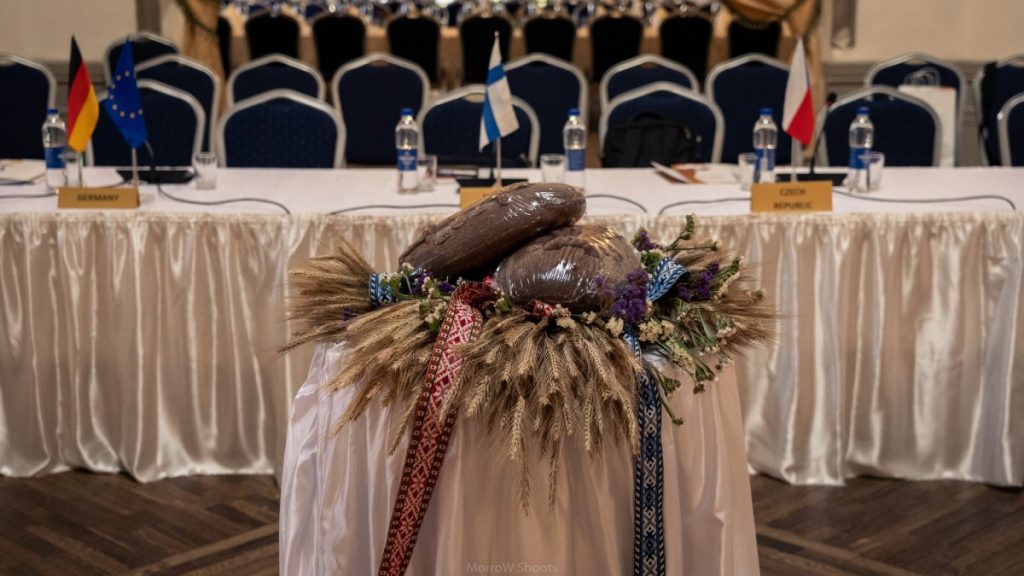 Over 90 participants from the partner countries of the PeaceBread network Bulgaria, Czech Republic, Germany, Hungary, Latvia, Lithuania, Rumania, Slovakia and Slovenia attended –representatives of the Ministries of Agriculture as well as those from civic partner organizations.

Upon invitation from the Estonian and Latvian partners guests from Finland and Ukraine joined the conference.

A part of the German delegation was the Ambassador of the Federal Republic of Germany in Estonia, Mr. Christoph Eichhorn, as well as his deputy Martin Franz Langer. They represented the patron of the PeaceBread project, the German Federal Minister Julia Klöckner. The civic side was represented by the chairman Anton Blöth, as well as the representatives of managing office of the PeaceBread Association, Dr. Marion Schenk and Dr. Gibfried Schenk; furthermore Christian Horn, Robert Knitter and Robert Jefferies from the documentary film team FILMART Potsdam.

The conference venue was Sangaste Castle, which is historically connected with rye cultivation in Estonia. The architect Otto Pius Hippius from Tallinn designed the manor. It was built between1874-1881 for the rye cultivator Count F.G.M von Berg (1845-1939) (www.sangasteloss.com). 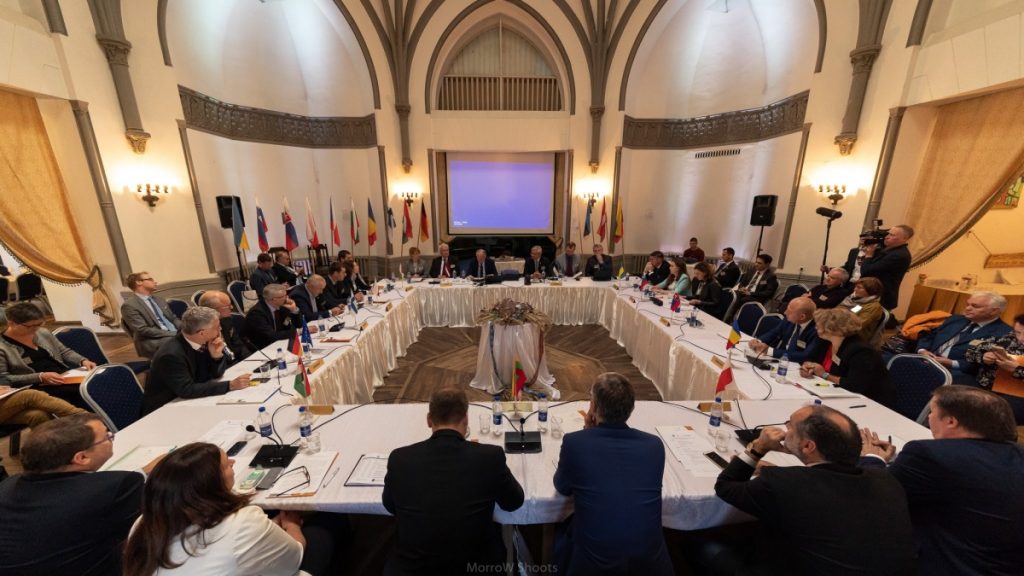 The exchange of opinions of the politicians was moderated by Vahur Kukk, President of the Estonian Rye Association.

The ministers Tarmo Tamm and Jānis Dūklavs welcomed the participants to the conference under the motto: „Regional and International cooperation: Local Is Global“. Tarmo Tamm emphasizes: „We need international cooperation to secure peace in the world“. With a view to this years drought it is important that the countries cooperate on EU level. „Without trade over borders there will be no enduring economic and social upswing”, said the minister.

With a keynote speech Enn Eessma, First Vice President of the Estonian Parliament adresses this years conference topic. „Today, there is no country who could cope on its own and come out as the winner”, Eessma said. He praised the friendly cooperation between the three Baltic states. „As a result, whichever international event we take part of, we are always happy to meet the Latvians and Lithuanians“, he emphasized. Against the background of great challenges on the European and Global stage he wished more influence of civic projects and organisations like the PeaceBread network.

Representatives of all partner countries and the guests from Finland and Ukraine explained their view of the conference topic in short contributions. Dr. Volker Petersen spoke for the EESC. The wish and the manifold efforts to strengthen the European Union further on a national as well as on an international scale becomes clear. 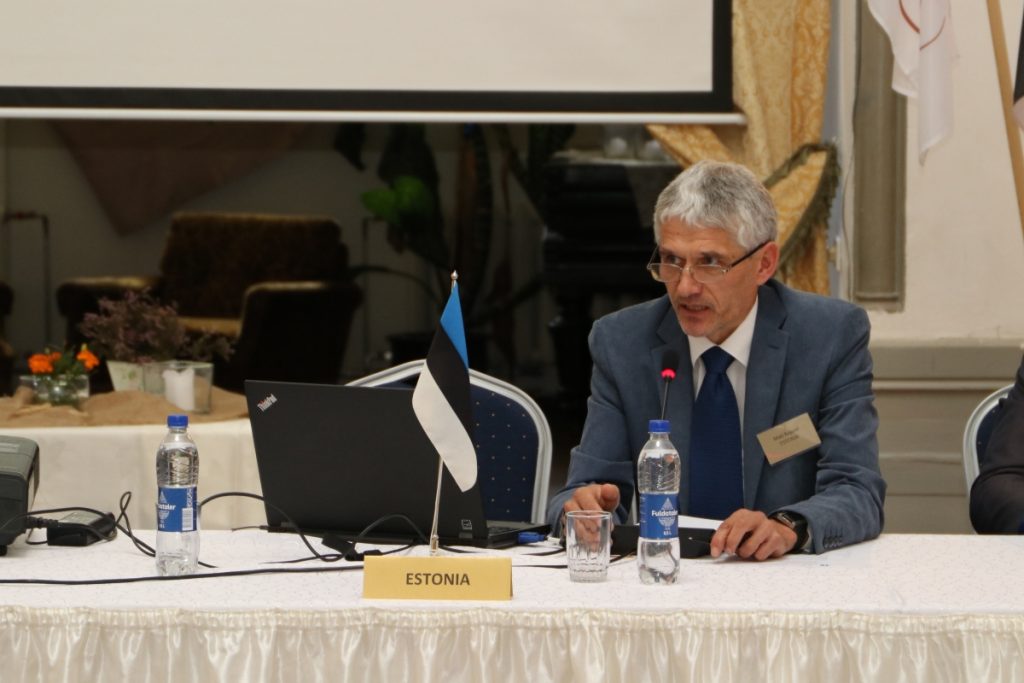 The second part of the conference was shaped by the representatives of the civic partner organsations. Kaspars Žūrinš took over the moderation, director of the Latvian Center for Rural Consulting and Education. The key note speech was given by Edgars Linde, Member of the Centers Board.

For the PeaceBread Association spoke Dr. Gibfried Schenk. „Through PeaceBread we connect polital and civic engagement with emotions”, said Schenk. „Positive transnational emotions, friends over country borders help us to live those European values, we mention so often, so that they will not become just mere lip service.“ He calls upon the participants to make use of the network in between the annual conferences, for example by mutual visits to agricultural example farms and companies. 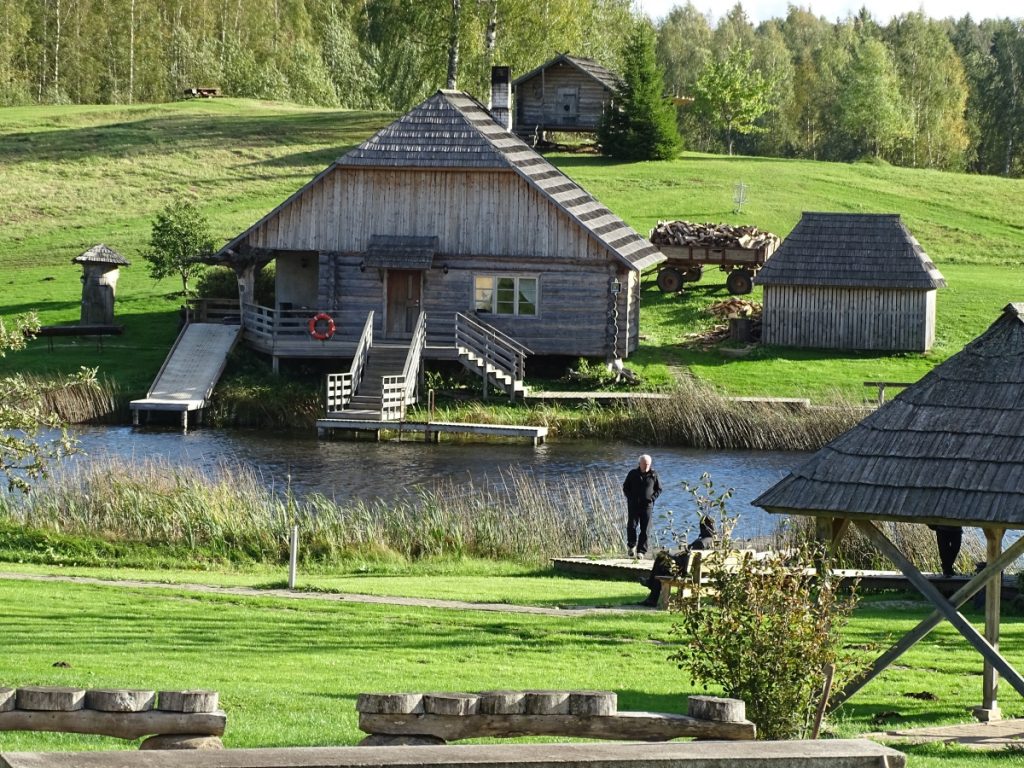 After the lunch break a visit is paid to the 135 year old „Hellenurme“ water mill and to the “Witch Country”, an amusement park in Nõiariik. The recreation park is for families. Kids find a lot of things to do and adults also get their worthwhile. The conference participants tried witch broom throwing and sitting football. Very well received was the witches dance. 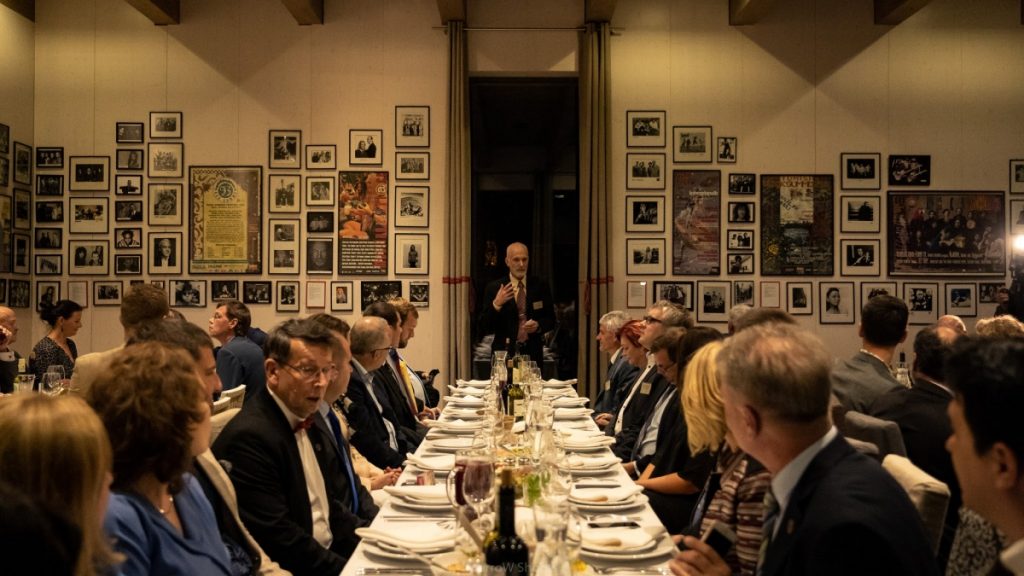 The German ambassador Christoph Eichhorn gave a toast and was beeing interviewed.

A big surprise came from Vahur Kukk, President of the Estonian Rye Association. He presented Dr. Gibfried Schenk with the newly endowed Honorary Medal of the Association. 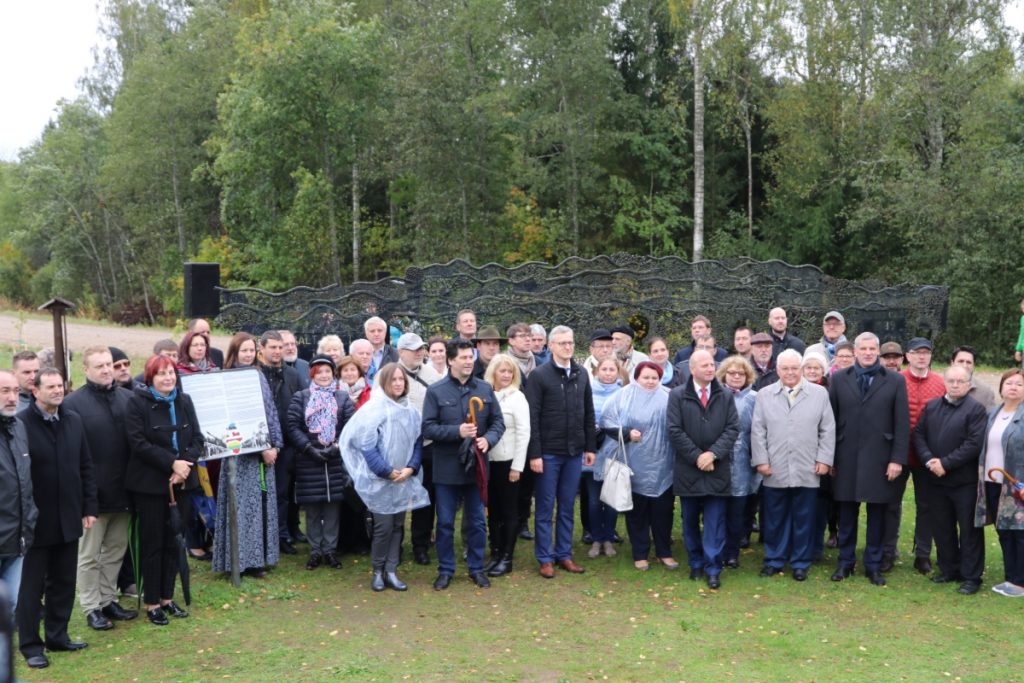 The last day of the annual conference started with a visit to the memorial „Baltic Way“, the longest human chain known in history on August 23rd 1989 from Vilnius in Lithuania over Riga in Latvia to Tallinn in Estonia. Over a million people from the three baltic countries connected themselves to form a human chain to demonstrate their unity in the desire for freedom and independence from the Soviet Union.

The memorial is situated at the border crossing between Ungurini (Latvia) and Lilli (Estonia). Local politicians of both border towns gave short speeches. Estonians, Latvians and Lithuanians planted oak trees at this historical site.

The road was closed off and served as a stage for children of a folk dance group and Latvian singers. The cold and the rain had obviously nothing against the feeling of togetherness between friends.

How natural open borders have become for us. 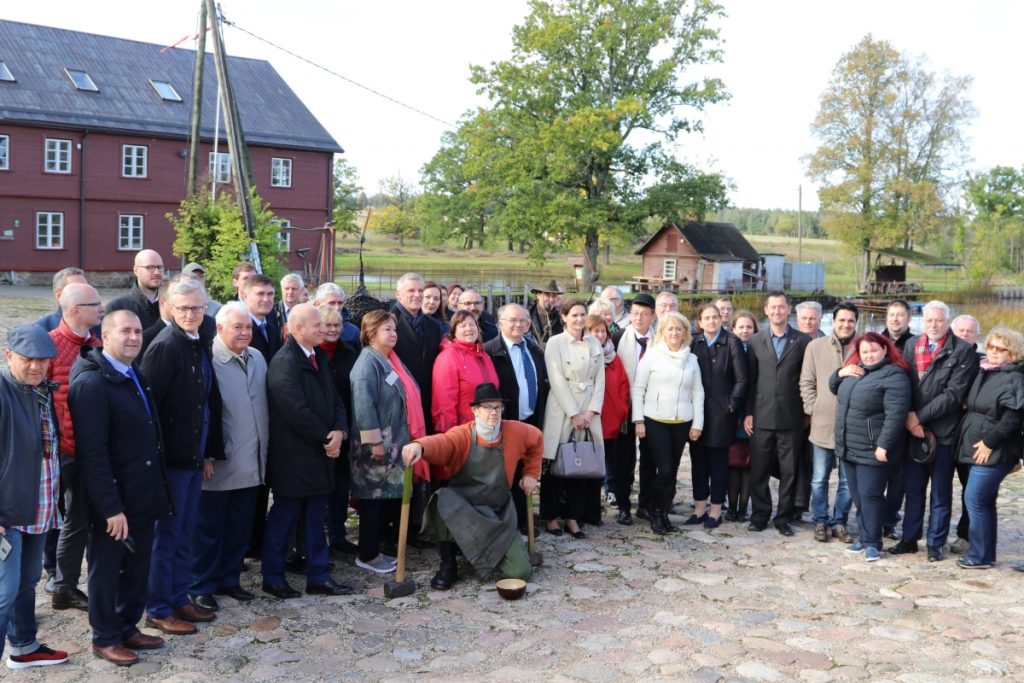 The last conference venue was the histrorical water mill in Koni, Latvia, which functions as a museum as well as a meeting place for the rural area that surrounds it. The very well preserved mechanism of the historical mill and wool spinning mill is very impressing.
The participants who are daring enough could contribute to a painting that the Latvian hosts wanted to give to the PeaceBread Association. The idea cames from Arvīds Krivens: one of his great photos of a grain field owned by the farmer and countrywoman Maija Šmite from the town of Sēļi has been recreated by the artist Līva Graudiņa as a painting.

How artistically talented the kids in Latvia are, showed an exhibition of drawings about the topic PeaceBread!

In front of the mill everybody came together to take the obligatory family picture. Everyone could mint a coin with the PeaceBread symbol.

In the cold weather the mood was even more cordial.

The Latvian Ministry for Agriculture invited everyone to a dinner. Rye bread could not be missing. The guests were being said good-bye. The managing directors of the German PeaceBread Association and the Latvian Center for Rural Consulting and Education sign a cooperation agreement.

Mister Antanas Venckus, department head at the Lithuania Ministry for Agriculture, was given the symbolical PeaceBread. He invited the partners to Lithuania in 2019! !

A big THANK YOU to the Estonian and Latvian hosts!