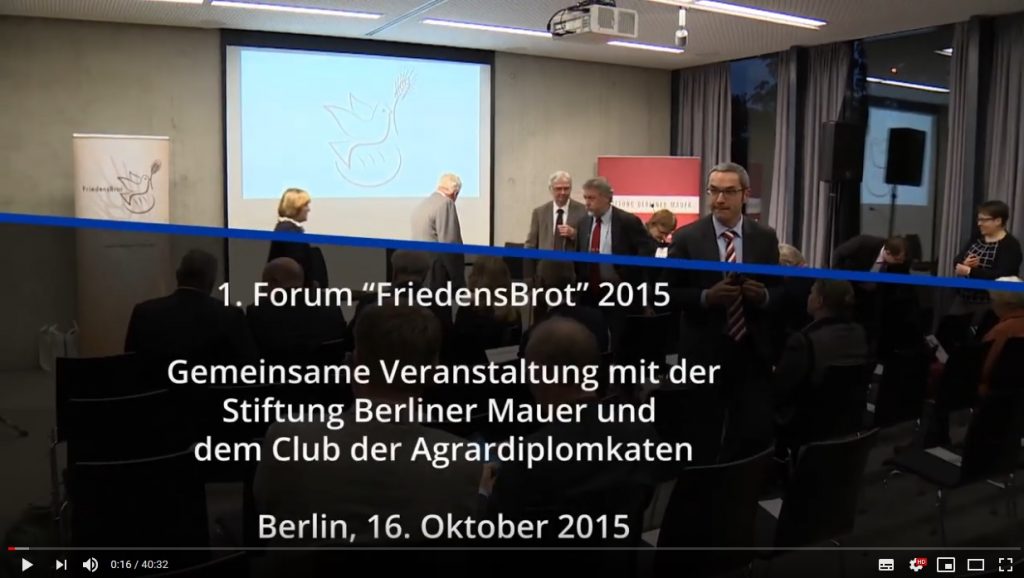 Berlin,16.10.2015. On Friday the 16th October PeaceBread celebrated a very successful premiere of the first PeaceBread FORUM at the visitors centre of the Berlin Wall memorial. The PeaceBread FORUM is meant to become a platform for discussion and interaction concerning peace, reconciliation and agriculture in Europe. Hopefully interesting stories and faces of an annually selected ´theme of the year´ will present itself in the future. It was clear that the 25th anniversary of the German Reunion in 2015 should be the first theme. FORUM PeaceBread invited Hans- Christian Maaß and Dr. Klaus Benthin. They proved to be two contemporary witnesses, who could show in exciting stories and personal experiences how their friendship, which started when they were children, was affected by the german separation and how they had witnessed and shaped german history during the Fall of the Berlin Wall. Furthermore they told the story how they, after their personal reunion, started a lot of joint projects and activities around the rural adult education centre (Ländliche Heimvolkshochschule) at Seddiner Lake. Both are founding members of this centre.

The evening was anchored by Catarina Zanner fron the RBB. She managed to procure very impressing and deep memories from both agronomists. Mister Maaß told the story of his attempts to escape from East Germany and the consequences his family and friends had to suffer because of that. He also recounted the ´discovery´ of Chancellor Dr. Angela Merkel. All of this managed to combine the stories from the past with the current refugee and financial crisis in Europe and posed the question how PeaceBread can be part of their solutions.

Adalbert Kienle, who was selected beforehand as the new chairman of PeaceBread by the members of the society, answered this question in his closing statement with an optimistic ´Yes´. He also thanked the supporters and partners of the first PeaceBread FORUM, especially the opening speakers Nandor Beki of the Club of Agricultural Diplomats and Dr. Maria Nooke from the Berlin Wall Foundation and he promised that there would be another PeaceBread FORUM in 2016.