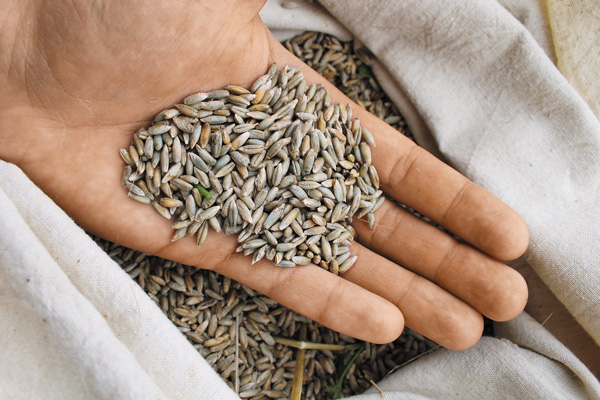 A rye field on the grounds of the former death strip of the Berlin Wall on Bernauer Street:
What a symbolic icon for peace and reconciliation!

Since the fall of the Berlin Wall, the parish of the Church of Reconciliation has managed that life can flourish again on the death strip. Every year since 2005 a rye field is tilled, harvested and the flour turns into bread.

Since 2013 the rye seeds from Bernauer Street are planted near symbolic and historically important locations of the reunification time in the countries of Central and South-Eastern Europe that joined the European Union after 1989.

In 2014, when the 25th anniversary of the fall of the Wall and the barbed wire was celebrated, the rye harvests from all participating countries came back for the first time to Berlin. This “Anniversary Rye” was mixed with the one harvested in Berlin, milled and baked into a joint “PeaceBread”.

The conference „Peace and Agriculture“ on September 30, 2014 in Seddiner See, Brandenburg, a ceremony “Sowing and Harvesting in Peace” as well as festivities honouring our European PeaceBread in Berlin on October 1st, 2014 were the beginning for the annual meeting in one of the partner countries respectively. To achieve this, a joint European PeaceBread network, the Forum “Peace and Agriculture” was founded.