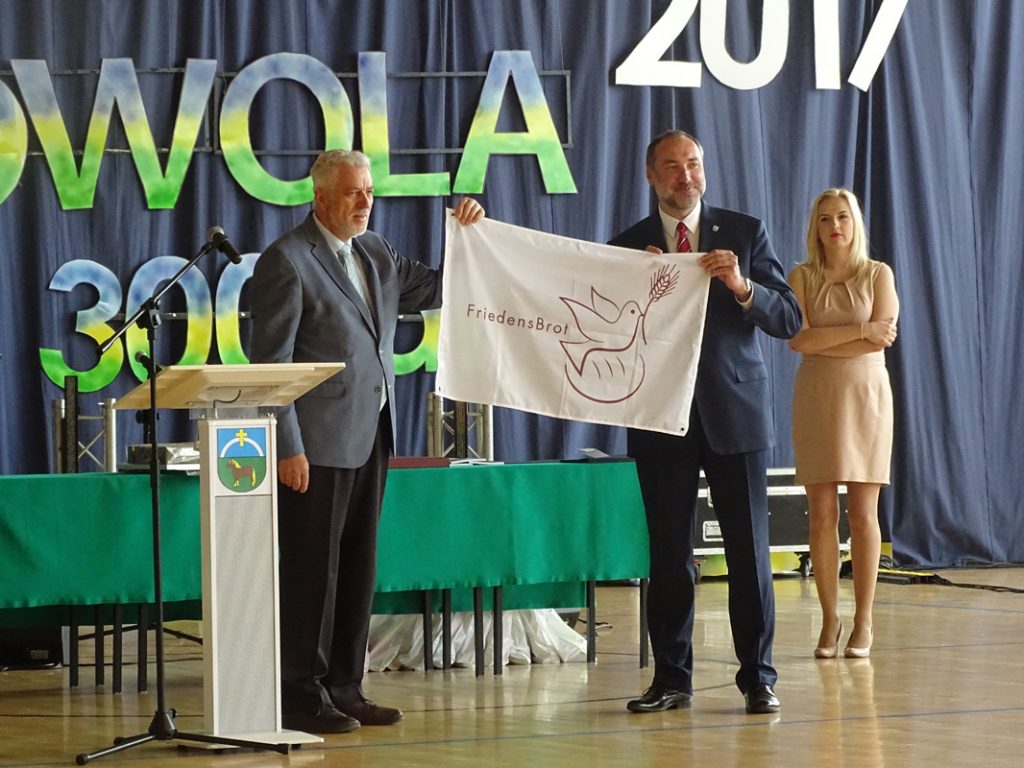 The mayor of Suchowola awards Dr. Gibfried Schenk, managing director of the PeaceBread Association with the city´s medal of merit

Suchowola. June 4th 2017. Around 100 guests of honour of mayors Michal Matyskiel, long-standing partner and ambassador of the European PeaceBread project are meeting together at 10 o’clock in front of the citizens´office in Suchowola. Stanislaw Kalemba, the former minister for Agriculture of Poland, is there– supporter of the PeaceBread project from the beginning. The mayor of the neighbouring town Sokolka, Ewa Kulikowska, is also joining the party. Partners from the neighbour countries Belarus, Lithuania and Ukraine are also joining. Suchowola and its committed mayor are living the European idea. Joint economic project are connecting neighbours.

The local youth brass band, which is known for its success in European competitions, is leading the festive company into the church, a former domain of the the priest Jerzy Popiełuszko. His assassination in 1984 was the starting point nation wide for the upturn of the Solidarność Movement. The courage and the vision of the Polish citizens, their commitment to the Solidarnosc was a significant contribution to the peaceful ending of the division of Europe. A special honour is the attendance of the closest family members of the priest Popiełuszko.

After the solemn mass the festive company is moving to the gym of the “Priest Jerzy Popiełuszko”. High School. The mayor is reminiscing in his speech the reciprocal history of the city, which has profited a lot lately from the infrastructure projects of the European Union. An illustrated speech from the local history teacher follows.

Citizens of the city and special guests are the ones receiving the city´s medal of merit. Among those are Stanislaw Kalemba and Dr. Gibfried Schenk for their commitment to the European PeaceBread project. Gibfried Schenk is calling to mind in his speech: „ I am very lucky being in Suchowola for the second time. It is always a very special feeling to be here, a place, which counts a the center of Europe and is especially connected to the Solidarnosc priest Jerzy Popiełuszko, who is highly honoured by us Europeans.“. The mayor presented a gift: a banner of the founding meeting of the European PeaceBread network in Berlin from September 30th to October 1st 2014.

Schoolchildren are presented with certificates and little gifts, they are the winners of the design competition for a mascot of the 300 year old city.

The festive ceremony is coming to an end with a cultural program. The mayor invites the guests of honour to a festive dinner afterwards.