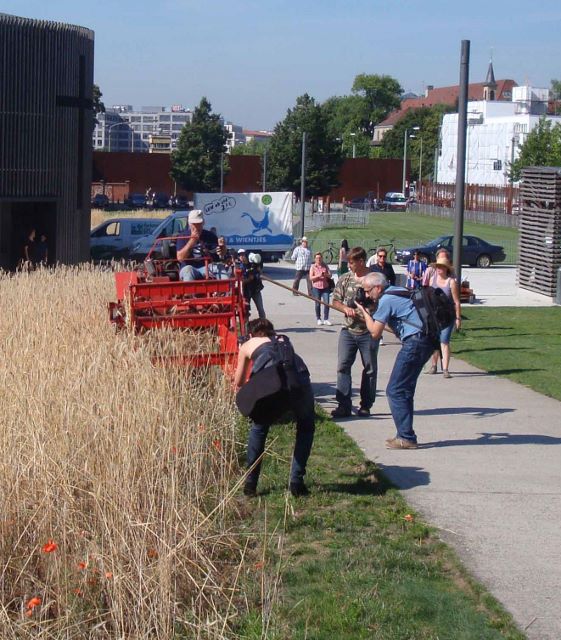 Whether during planting, growth or harvest – the small field of rye at the Chapel of Reconciliation on the former death strip at Bernauer Straße in Berlin sparks the interest and curiosity of visitors of the memorial site. In best midsummer weather, the rye was appropriately harvested by staff of the Thaer-Institute of Humboldt-University on 18th July.

Whereas the field of rye was started as an art-project by the Parish of Reconciliation some years ago, it now serves as starting point for the civil society project “Friedensbrot” (PeaceBread) on the occasion of the 25th anniversary of the fall of the Berlin Wall and the Iron Curtain. Twelve European countries participate in this “FriedensBrot” project. As at Bernauer Straße, fields of rye are also grown on historically important sites of the ‘Wendezeit’ (changing time) in all eleven European countries, which since joined the European Union. The rye from all these sites will be brought to Berlin, be mixed and milled – and then be baked in a deeply symbolical process to a European PeaceBread on 1rst October.

In conjunction with the celebration of the “FriedensBrot” (PeaceBread) at the Chapel of Reconciliation, there will be a two day conference on peace and agriculture in Seddiner See (Brandenburg) and Berlin. An official ceremonial act with active participation of the patron of the project, Federal Minister of Agriculture Christian Schmidt, will be held at Humboldt-University, Berlin. High-ranking delegations from all partner countries will be participating.