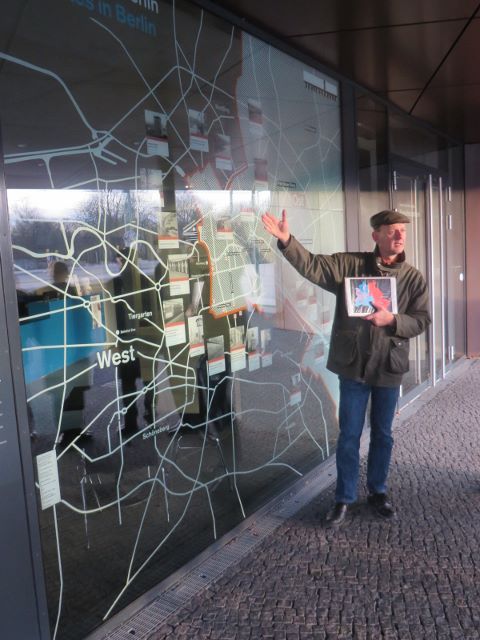 During a working visit to International Green Week in Berlin on 16 January 2015, a delegation of the European Economic and Social Committee (EESC) including members from the United Kingdom, Finland, Austria and Germany also paid a visit to the Berlin Wall Memorial. Prof. Axel Klausmeier, director of the memorial, impressively highlighted the importance of having young people from all over the world as visitors of such a site.

Together with Rainer Just from the Parish of Reconciliation, Adalbert Kienle and Dr. Gibfried Schenk as representatives of the association PeaceBread took the group to the field of rye and to the Chapel of Reconciliation. By growing a field of rye on the former “Death Strip” of the Berlin Wall year after year, a “life strip” of enormous symbolic significance has been established. On this site, also the ceremonial act “Sowing and Harvesting in Peace” took place with broad participation in October 2014. The EESC delegation participated in a prayer for peace and prosperity.

In addition to attending the Global Forum for Food and Agriculture, also talks to representatives of the official Green Week partner country Latvia of were part of the programme of the EESC delegation during their visit to International Green Week. In Berlin, Latvia symbolically passed on the “PeaceBread” to Poland as organiser of this year’s PeaceBread Conference with 12 European countries.

As mouthpiece of organised civil society, the European Economic and Social Committee (EESC) in Brussels provides advice for European Institutions and prepares expert’s opinions related to proposals for EU legislation. Members are nominated by the 28 member states and represent a broad spectrum of societal and professional backgrounds as well as an extraordinary wealth of knowledge and experience. The Section for Agriculture, Rural Development and the Environment of the EESC has been in favour of the idea of the PeaceBread Initiative right from the start, has accompanied and supported the work of the association in general and particularly during the conference “Peace and Agriculture” in Berlin, on the occasion of the 25th anniversary of the fall of the Berlin Wall and the Iron Curtain, from 29 September to 1 October 2014.