Members of the association PeaceBread (Friedensbrot e.V.) visit their Polish friends for the harvest of the field of rye in Suchowola

The delegation is accompanied by the members of the Polish Sejms, Mr Stanislaw Kalemba, Mrs Dorota Bialczak, Counsellor of Embassy in the Polish embassy in Berlin, Mrs Anna Szymczyk, member of staff in the Department for the European Union and International Cooperation at the Polish Ministry for Agriculture and Rural Development, Mr Friedemann Kraft, representative of the German embassy in Warsaw, Mr Cesary Urban, Head of the Department of Crop Protection of the BASF-representation in Warsaw as well as the documentary filmmakers of FILMART GmbH, producer Donat Schober and camera operator Rüdiger Pelikan.

Stanislaw Kalemba addresses the attendees and underlines: “For me personally, the commemoration of the 25th anniversary of the fall of the Berlin Wall and of the Iron Curtain in Europe is the highlight of the year 2014. I am pleased that we meet in Suchowola, the native region of Solidarnosc-priest Jerzy Popieluszko, today. The Voivodship Podlaskie has a long tradition, and it is a worthy site for the Polish contribution to the European PeaceBread.“

With tasters of culinary delights, the guests get a first impression of the traditional hospitality of Podlaskie. 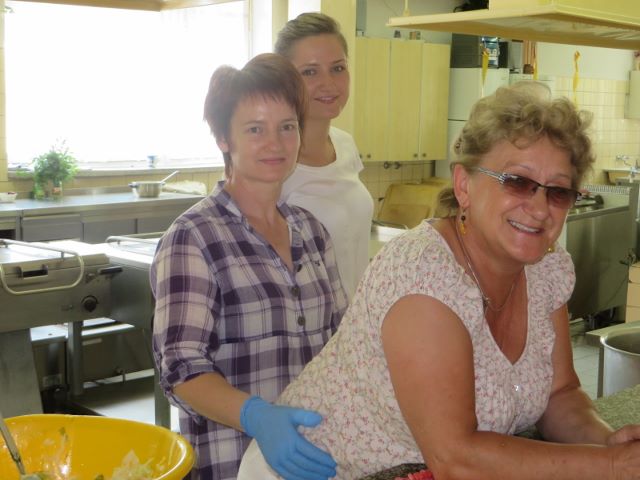 The next stop of the visit is devoted to the commemoration of Jerzy Popiełuszko. Marianna, sister of the priest, and his brother Jozef and his wife welcome the delegation at the memorial on Suchowola’s central square. On the occasion of a wreath ceremony, member of the Board of PeaceBread (FriedensBrot e.V.) Anton Blöth emphasises: “In the Federal Republic of Germany, we esteem the role of the Solidarnosc-movement for overcoming the European division. We are glad to be able to visit an educational institution today, together with close relatives of priest Jerzy Popiełuszko, which puts such a strong emphasis on the education of young people to make them experts, Polish patriots and convinced Europeans.“

Together with family members, the delegation pays a visit to the cemetery and honours the parents of the Solidarnosc-priest. 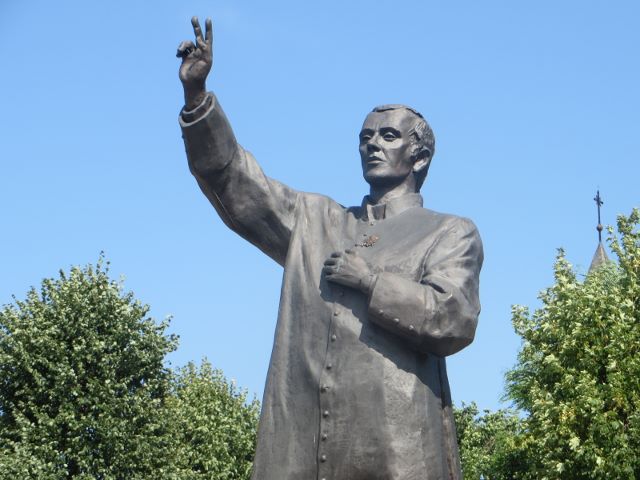 The Popieluszko family then accompanies the guests to the highlight of the day, the mutual harvest of the PeaceBread rye.

Michal Matyskiel, Director of the school complex in Suchowola, welcomes the numerous ‘farm hands’: “We have supported the PeaceBread project right from the start. Last year, our students visited the Wall Memorial at the Chapel of Reconciliation on the occasion of the seeding of the PeaceBread-rye in Berlin. Now we bring in the harvest in Poland together with our German partners, and we are looking forward to the conference “Peace and Agriculture” and the grand ceremony of the European PeaceBread in Berlin at the end of September / beginning of October.”

In his welcome address, Dr Gibfried Schenk, General Manager of the association PeaceBread (FriedensBrot e.V.), reminds of the 2014 anniversaries – such as the onset of the First World War 100 years ago, the start of the Warsaw Uprising 70 years ago, the murder of Solidarnosc-priest Jerzy Popiełuszko 40 years ago, but also the war in the Ukraine of today. He emphasises: “With the European PeaceBread, we combine the commemoration and preservation with the consideration and the shaping of a peaceful future.”

Everybody then participates in the harvest of the rye which – according to the idea of the project to unify people – was seeded with a mixture of rye seeds harvested on the former death strip at the Berlin Wall and a traditional Polish rye variety. In observance with old customs, the harvest is started with scythe and sickle. The first sheaf is set up jointly with great joy whilst the whole scenery is observed by a stork which circles the field. 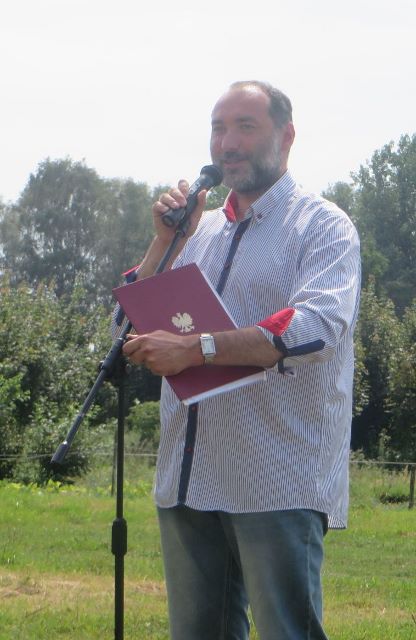 Following a joint lunch, Director Matyskiel accompanies the delegation on a visit of two agricultural enterprises in the perimeter of Suchowola.

First the delegation visited the farm of Zofia und Bogusław Krynicki in the village Piątak, municipality of Janów. The farm owner are the winners of the contest of voivodship Podlaskie 2014 in farm safety work

PrevMinister Marek Sawicki: Together we should take care about taking full advantage of the yield potential of the European agriculture
PeaceBread harvest ceremony in LatviaNext