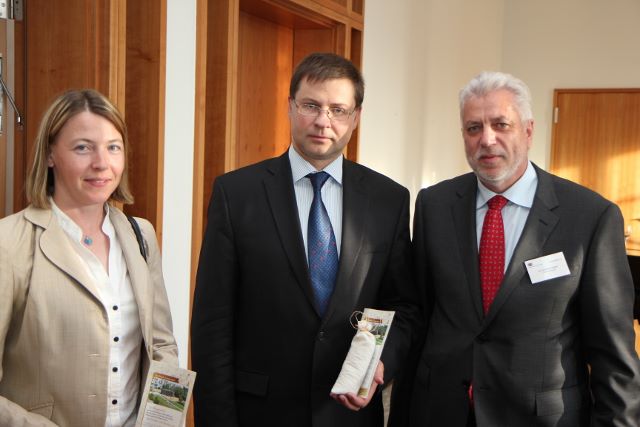 Following an invitation of the Latvian Embassy in Germany and the Board of Commerzbank AG, Latvian Prime Minister Valdis DOMBROVSKIS gave a speech on the issue of „Latvia: The right time to introduce the EURO“ in the Berlin Offices of Commerzbank at Pariser Platz on 3 July 2013.

Prime Minister DOMBROVSKIS impressed the numerous participants with his interesting statement on the fiscal and socio-political backgrounds of the introduction of the EURO in Latvia on 1 January 2014. The accession of Latvia as 18th country of the EURO-zone is an important signal for the Latvian citizens and far beyond. It is a clear indication of the still high attractiveness of the European Currency Union.

On the side of the event, Ms Inese BIRGELE, First Secretary at the Latvian Embassy and Dr. Gibfried SCHENK, General Manager of the association FriedensBrot e.V. (PeaceBread) had the opportunity to inform Mr DOMBROVSKIS about current activities of the PeaceBread project. With a little bag of rye, harvested on the rye field on former death strip at the Berlin Wall and a PeaceBread project flyer, Dr. SCHENK expressed his appreciation of the Latvian participation in this mutual project. Prime Minister Valdis DOMBROVSKIS in turn expressed his gratitude for the interim report and forwarded his best wishes to the partners from all participating countries for the further implementation of this highly symbolical project.