FriedensBrot 2021 stands for cooperation and solidarity across borders. Looking forward to the International PeaceBread Conference on 7 September, 2021 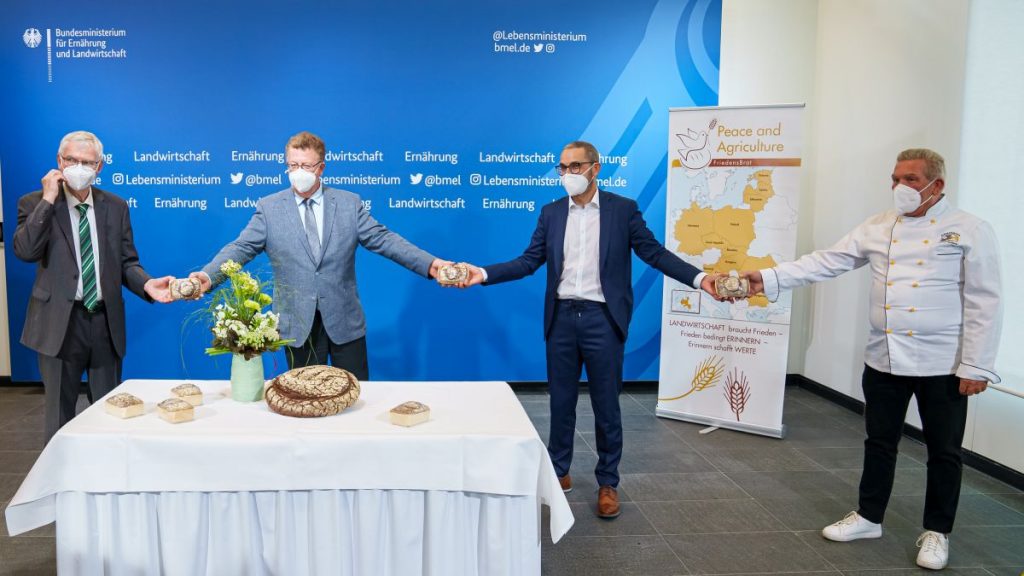 On 23rd August, the PeaceBread association presented this year’s PeaceBread to Mr. Hans-Joachim Fuchtel, Parliamentary State Secretary of the Federal Ministry of Food and Agriculture (BMEL). On this occasion, Mr. Anton Blöth, Chairman of FriedensBrot e.V. explained:
“European PeaceBread is a unique symbol for cooperation and solidarity across borders in Europe. Every year, we and our network partners take pride, not only in making it a living proof of the vitality of the PeaceBread idea, but also as a powerful sign and reminder of the significance of European unity and understanding.
Our special thanks are due to the Federal Ministry of Agriculture led by our patron Ms. Julia Klöckner, for many years of support and promotion of the PeaceBread idea.
The seed of 2014, when the first collective PeaceBread was made from the rye grown at the Berlin Wall and in 11 east and south-east European partner countries, and when this e international PeaceBread network evolved, has literally risen and is yielding fruit.
For this reason, this PeaceBread 2021 also stands for our joyful anticipation of this year’s international conference “Peace and Agriculture – for a better solidarity in Europe” which will be held as a virtual version with the participation of state and civil-society participants. Our sincere thanks to Mr. Hans-Joachim Fuchtel for his welcoming speech.”
As before, the 2021 PeaceBread comes from the Zimmermann bakery in Spandau, which had already baked the first PeaceBread in 2014 on the occasion of the 25th anniversary of the fall of the Berlin Wall. Batches of rye from the partner countries originating from the first rye field around the Chapel of reconciliation in the former death strip of Bernauer Straße were again received in Berlin and processed and milled under the assistance of the Albrecht Daniel Thaer-Institut of Berlin’s Humboldt University and the Beelitz windmill.