16th Rye harvest at the Chapel of Reconciliation 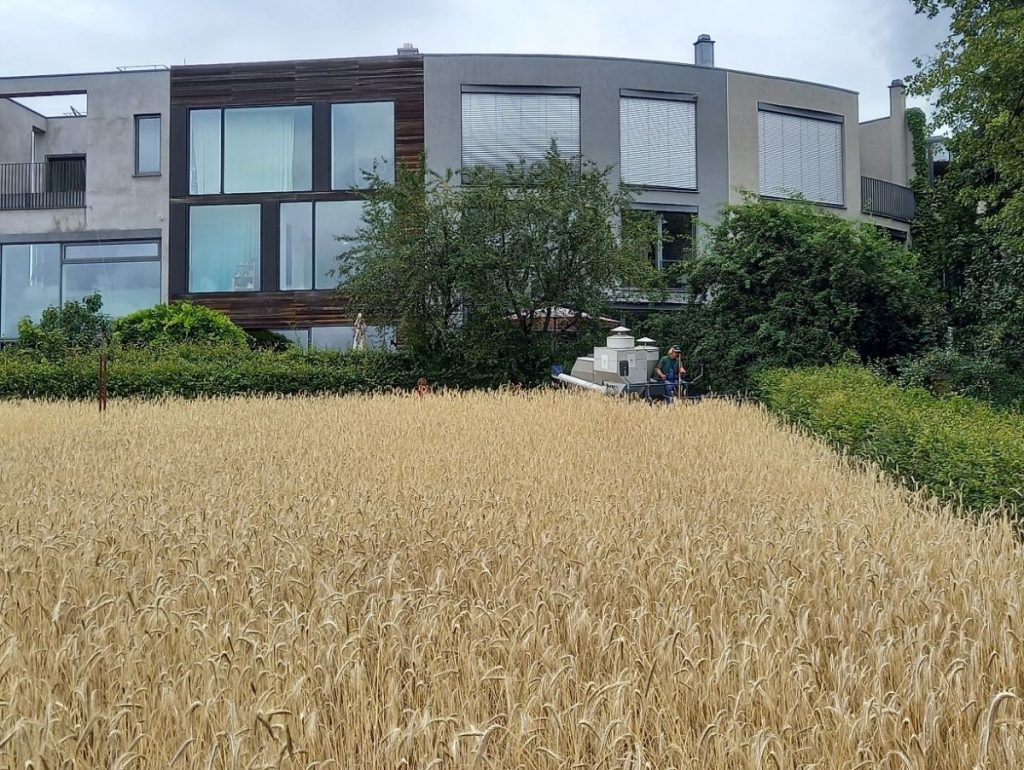 On July 21, 2021, at the Chapel of Reconciliation, the 16th rye harvest since the beginning of this project in 2006 was brought in. This took place in the framework of PeaceBread for the ninth time.
As in all previous years, the announcement in the regional and national press attracted a large number of interested people to Bernauer Strasse, who followed the event with great interest. Representatives of the press surrounded the combine harvester of Humboldt University of Berlin as a special technical attraction in the urban city center. Among those present were members of the board of the PeaceBread Association (FriedensBrot e.V.), the Berlin Wall Foundation, the Protestant Reconciliation Church, students of Humboldt University of Berlin and the spiritus rector of the 2005 project, the sculptor Michael Spengler.
Expectations were particularly high this time, because the rye stood on soil that had been fundamentally improved in the fall of 2020 with clay soil from Havelland/Brandenburg. The rye crop was correspondingly strong before the 2020/21 rye year was successfully concluded with the harvest threshing.
The crop will now be processed and, together with samples from the other countries involved in the European PeaceBread Project, milled and baked into breads, which will then be sent to the participating international institutions and presented and broken at this year’s annual digital conference on September 7, 2021.
With the next rye sowing scheduled for the end of September 2021, the new rye year 2021/22 is already on the firmament.

PrevA letter from Bulgaria
FriedensBrot 2021 stands for cooperation and solidarity across borders. Looking forward to the International PeaceBread Conference on 7 September, 2021Next