Presentation of the PeaceBread to the patron of the project PeaceBread 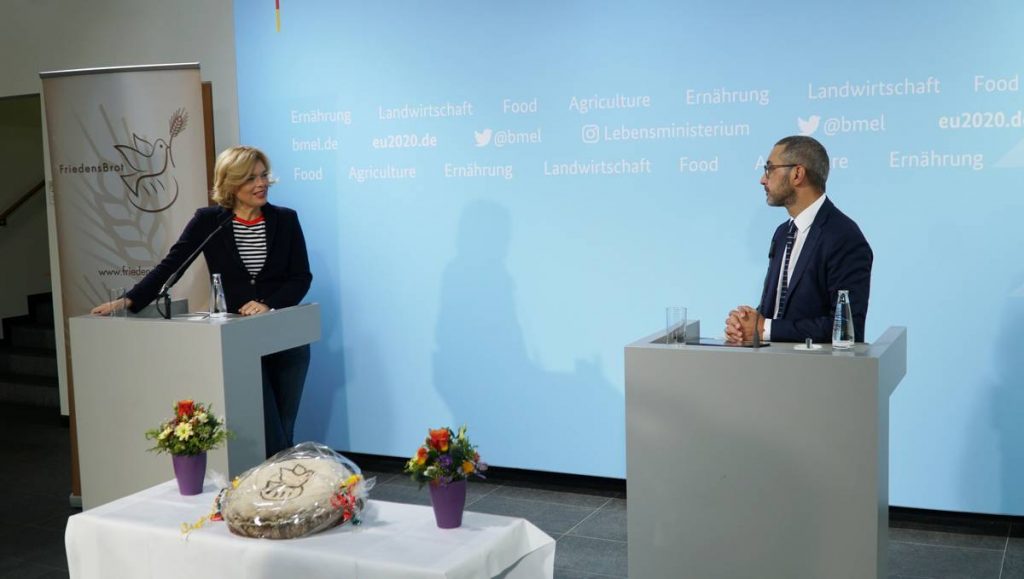 The annual conference “Peace and Agriculture” of the international PeaceBread Network, originally planned for September 2020 in the partner country Slovenia, was cancelled due to Corona. But together with its international partners, the Association FriedensBrot e.V. did not want to miss this year’s PeaceBread. At the request of their German colleagues, the partner countries sent their rye consignments at short notice not to Ljubljana, but to Berlin.

Link to video
Here are some examples:

On September 29th the association members Michael Baumecker and master baker Wolfgang Zimmermann drove to the Bockwind Mill in Beelitz.

The grinding was carried out without complications.

Everyone was satisfied with the result. On October 5th, the flour went to the Bakery and Pastry Sop (Bäckerei – Konditorei) Zimmermann, which by the way already provided the very first PeaceBread in 2014.

There are no photos of the baking in the nightly bakery, but there are photos of the result on October 8th: The PeaceBread of 2020! in small: 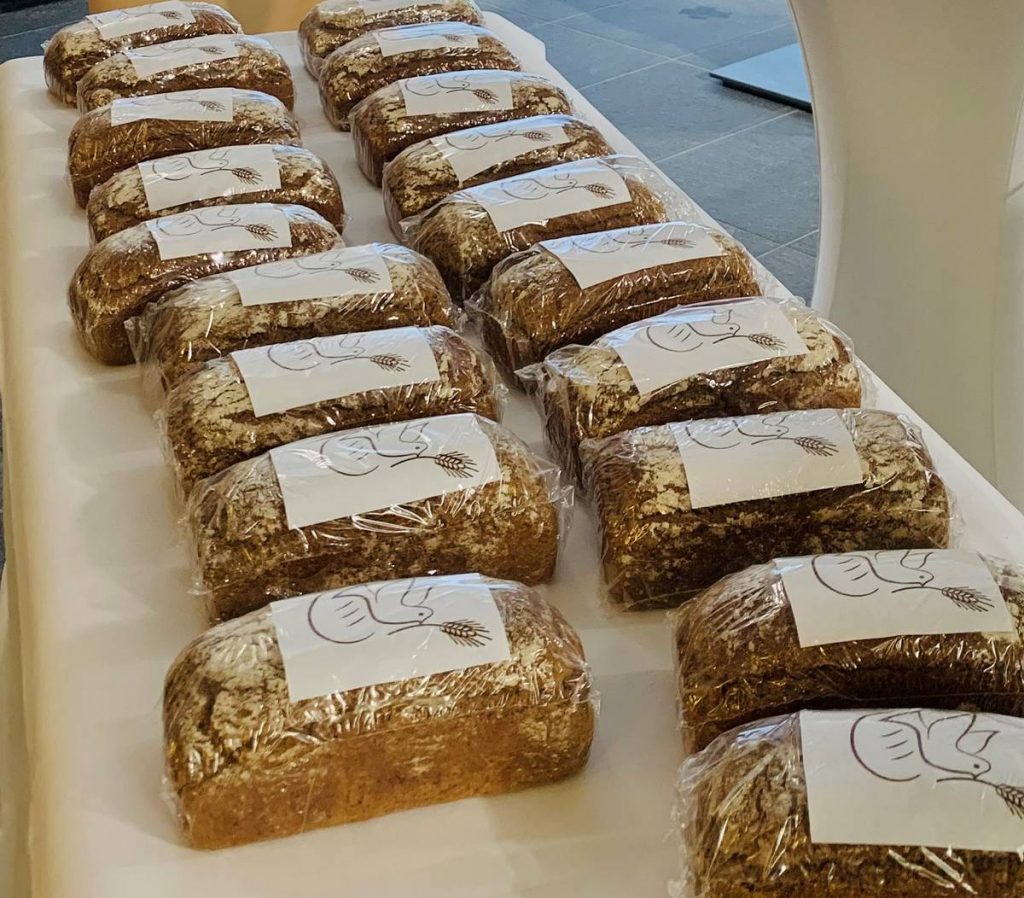 and (for the patron Federal Minister Julia Klöckner) in big: 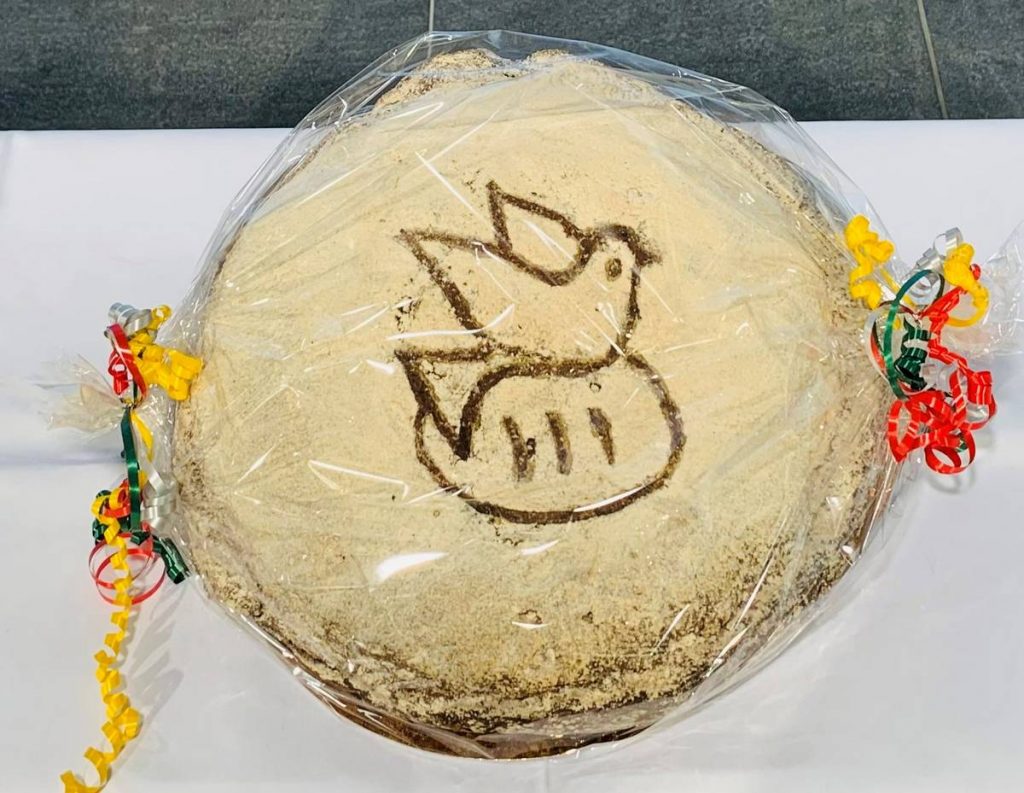 So the handover ceremony could then start on October 8th, 11:30 a.m., in the press center of the Federal Ministry of Food and Agriculture (BMEL).

In the presence of a number of representatives of the embassies of the partner countries, employees of the Federal Ministry for Food and Agriculture, Chairman Anton Blöth and Managing Director Dr. Gibfried Schenk of the PeaceBreade Association, and master baker Manfred Sommer, who represented his boss Wolfgang Zimmermann, Federal Minister Julia Klöckner praised the FriedensBrot as a special symbol of European unification.

„The PeaceBread is a double symbol“, so Klöckner and continued: „It shows how diversity becomes something common. And it makes it clear that peace is only possible when everyone has enough to eat. Both are fundamental ideas of the unification of Europe. One pillar and unique selling point is the Common European Agricultural Policy. It is the guarantor for food security and thus also for peaceful coexistence in Europe, proof that Europe is capable of acting together.“

At the beginning of his reply, the chairman of the FriedensBrot e.V. association, Anton Blöth, reminded of the courageous citizens of Hungary who “knocked the first stone out of the wall”. “In the same way, one could say that this stone was already loosened in the Gdansk shipyard or was finally removed in the Baltic States by hand to hand. For us – at the PeaceBread Association – matters that we firstly do not forget the special contribution of our east- and southeastern European neighbour countries to the German Unification and secondly also the contribution from courageous and committed ordinary citizens on both sides of the former Iron Curtain, including in agriculture and the rural areas, do not lose sight of the fact that we think of reunification with joy and gratitude.“

Anton Blöth emphasizes further, „that on our website since the beginning the following triad exists:

Within our common PeaceBread, that emerges now in the year of the 25th anniversary of the Fall of the Berlin Wall from a community action of partners from twelve European countries, these elementary principles and messages are mirrored.

Above all, however, the PeaceBread is a simple but no less powerful symbol for life and the food it requires, but also for public spirit and the added value of European cooperation.

From the original idea to bake a common European bread as a sign of joy and gratitude for the German and European unification, which comes from rye lots along the Iron Curtain, which originated here at the Berlin Wall, from the rye field at Bernauer Strasse, much more has developed in the meantime:

Doing and working together, remembering and talking together, yes, and also celebrating together has experienced a dynamic and created a network, which the Minister acknowledged as “a lived piece of European integration” during her visit to our Annual Conference 2019 in Lithuania.”

Here the press release of the Ministry for Food and Agriculture: