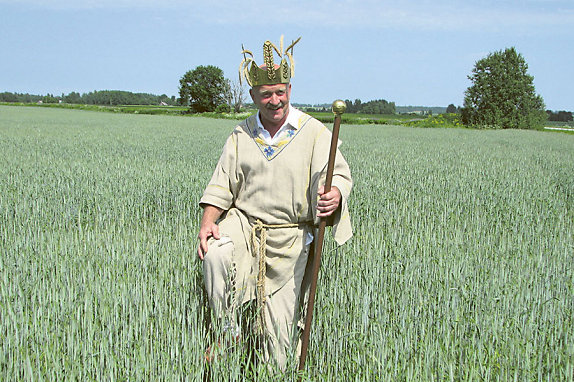 Rye is the Estonian national cereal and staple food of Estonians. But for all that wheat has become a strong competitor, rye bread still ranks first on Estonian breakfast tables until today. During times of the Hanseatic league, rye export was one of the most important financial sources for the Tallinn Towers. It was registered as late as 1772 that rye made up two thirds of all grain exports from Tallinn.

Nowadays, there is a registered rye association in Estonia with more than 100 members, individual persons as well as corporate bodies. This association is unmatched in Europe.

In addition, Estonia has a “rye king”, elected by the rye association – HANS THE FIRST (common name Mr KRUUSIMÄGI) being king for several years now. According to the statutes of the association, king will be the grower who grew the largest area with rye in the previous year. HANS is a man with entrepreneurial spirit anyway. In addition to growing rye, he takes care of the third largest fish farm in Estonia, he brews rye beer and keeps wild boar and a seal as pets on his farm.

We are happy that HANS THE FIRST (see the photos attached) actively accompanies the “PeaceBread” project. The king is fully informed about the state of the „PeaceBread“ project and will surely be present during harvest. His fields are situated about 20 km from the Kärde Peace House and 30 km from the „PeaceBread“-rye in Jõgeva.

The photo above shows the king in his rye field; on the second photo HANS can be seen with former Estonian President ARNOLD RÜÜTEL.

The last picture shows HANS THE FIRST during seminar “More attention to rye” in Adelboden, Switzerland, in 2011. He presented a bag of rye seed to Mr LEHMANN, the Swiss representative at FAO, organisator of the meeting. The woman is HANS´ wife.

PrevA great day for PeaceBread project in Romania: The full report of 2013, Oct.10
PeaceBread rye on national memory day of the Hungarian Revolution and Freedom Fight of 1956Next