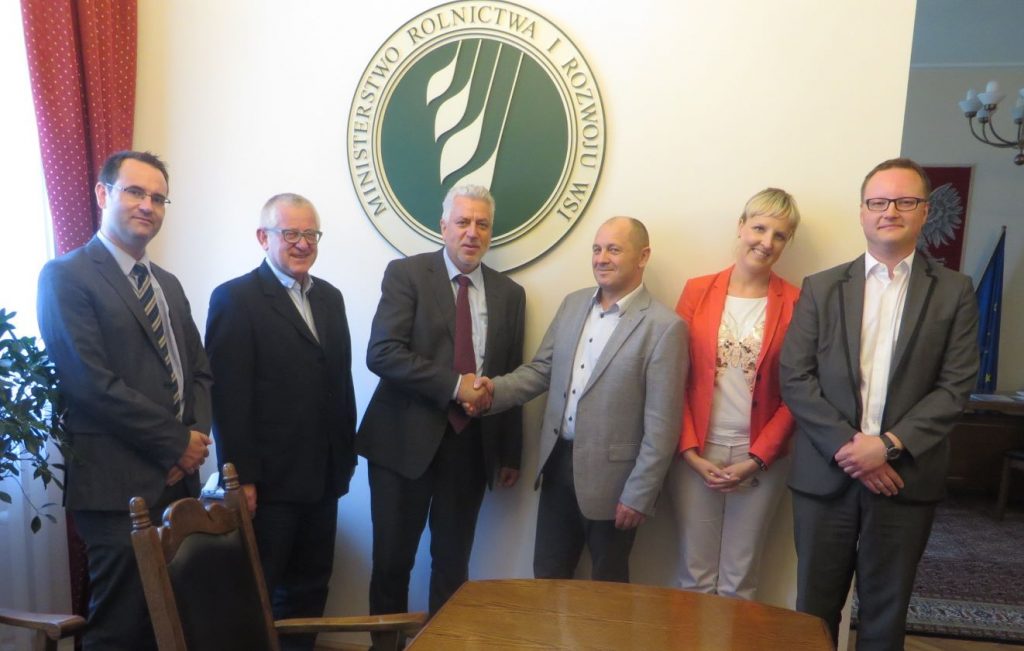 Warsaw, 29.07.2014: Visit in the Ministry o Agriculture and Rural Development

The managing director of PeaceBread Association (FriedensBrot e.V.) Dr. Gibfried Schenk had the opportunity to meet Minister of Agriculture and Rural Development of the Republic of Poland. The meeting was attended by Mr Robert Piłat, Deputy director in the Departement of International Cooperation of the Ministry, Mrs Dorota Białczak, counsellor of embassy in the Polish embassy in Berlin, Mr Friedemann Kraft, Representive of the German embassy in Warschau and Marek Traczyk, Chairman of the Association of the Polish Media.

The German representatives were on the way to paticipate in harvesting of PeaceBread rye in Suchowola. They underlined their gratefulness about the engagement of Polish partners in PeaceBread project from the very beginning. Mr Schenk informed about preparation of Conference „Peace and Agriculture“ and Ceremonial act „Sowing and harvesting in peace“, which will be organised 30.09. and 01.10.2014 in Berlin.

Together with Polish Minister Marek Sawicki nearly all Ministers of Agricultural ressorts of the middle and south eastern European partner countries already informed, that they will join these events with pleasure. Mr Schenk explaind, that the PeceBread association is very engaged to create all nessecary circumstances for a successfull meeting of peace and understanding. Minister Sawicki stated, that Poland will organise a conference in Poland 2015 to support the continuity of PeaceBread network.

The Ministry of Agriculture and Rural Development published following press release to the meeting in Warsaw:

„Today Minister Marek Sawicki was visited by the director of the Friedensbrot Association, dr Gibfried Schenk. Dr G. Schenk’s visit to Poland was related to participating in a celebration dedicated to harvesting the rye that was sown in Suchowola. The rye will be used to make flour for the Bread of Peace.

The Bread of Peace project is connected with this year’s celebration of the 25th anniversary of the Fall of the Berlin Wall. In the course of the celebrations, the creators and participants of the “Friedensbrot” project would like to show the relations between ensuring peace and the impact of sustainable agriculture on well-being, prosperity and happiness of societies. By September 2013, participating countries were to sow seeds provided by the Association in a place that was symbolic and significant from the historic point of view. In Poland, it was sown in the premises of the Complex of School in Suchowola.

About 50 kg of the grain harvested in individual countries will be sent back to Berlin. The “anniversary grain” will be ground together with the grain harvested in Berlin. Afterwards, “European Bread of Peace” will be baked by the representatives of the participating countries. The celebrations planned for 30 September and 1 October 2014 will be accompanied by a scientific conference entitled “Agriculture and peace – indivisible reality in Europe”, which will be attended by Minister Marek Sawicki. The Minister will hold a welcome speech on behalf of all participating countries.

Dr Schenk thanked Minister Sawicki for his cooperation with the Polish Embassy in Berlin in the project’s implementation. He also said that it is the intention of the organisers to maintain the network of contacts between the participating countries and to continue the project by organising international conferences in the future, dealing with agriculture and rural development by individual countries. Dr Schenk asked Minister Sawicki to support the initiative to organise the first from the series of such conferences in Poland, in 2015.

The Minister confirmed the willingness to continue the Bread of Peace project and to organise the conference in Poland. The Minister also informed that our country has multiple bread-related initiatives that could be presented during such an event. He also emphasized the significance of access to safe food for maintaining the peace in the world.

“In this context, together we should take care about taking full advantage of the yield potential of the European agriculture,” said Minister Sawicki.“