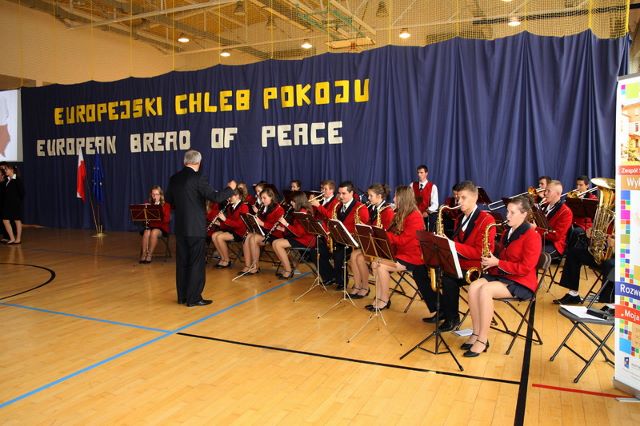 We have received a report from Artur LAJEWSKI today about an impressive event on the occasion of sowing the rye in Suchowola, Poland:

On 19 September 2013, we have sown the rye in Suchowola. From this rye, grain will be grown for the European PeaceBread, then to be shared out in Berlin in 2014.

The celebration was honoured amongst others by the vice-marshal of the voivodship Podlaskie, Mr Mieczysław BASZKO, the vice-head of the Podlaskian School Supervision Authority, Ms Wiesława ĆWIKLINSKA, representatives of the Minister of Agriculture, Mr Robert PILAT (Head of Department for Cooperation with the EU) and Mr Tomasz FILONOWICZ(advisor to the minister of agriculture.)

In this text-music-ensemble, the students illustrated the pathway to freedom endured by the countries in Middle and Eastern Europe. Following the performance of this arrangement, the delegation of guests went out to the field of the school to sow the grain from Germany, which had been blended with grain from Okopy, the home town of the Solidarnosz Minister – priest JerzyPOPIEŁUSZKO.